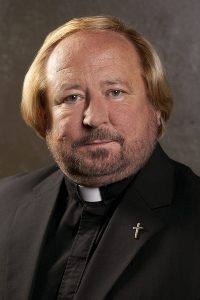 Fr. Ponec graduated from Creighton University in 1978 receiving a degree in psychology with minors in philosophy and business.  He attended seminary at St. Joseph of Arimathea in Berkeley, CA in 2005-2006.  Fr. Ponec is an officer on the Board of Directors for the Diocese of the Western States in the Anglican Province of Christ the King.

Fr. Ponec is assisted by the Reverend Deacon Ronald Reno.